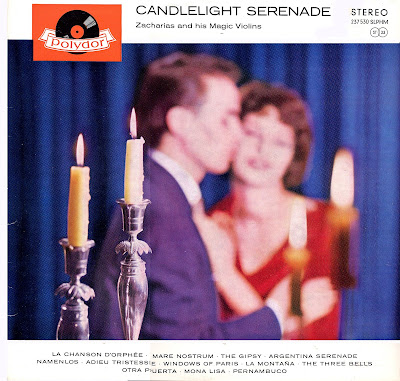 Lets have a dip into "Bob's contibution and we now have that "Guy"with the Magic Violin doing some classic tunes and doing a great job !!...Some late night listening !!
I think the comments on the back sleeve say's it all !!! 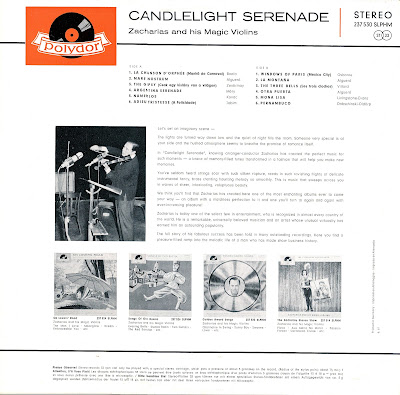 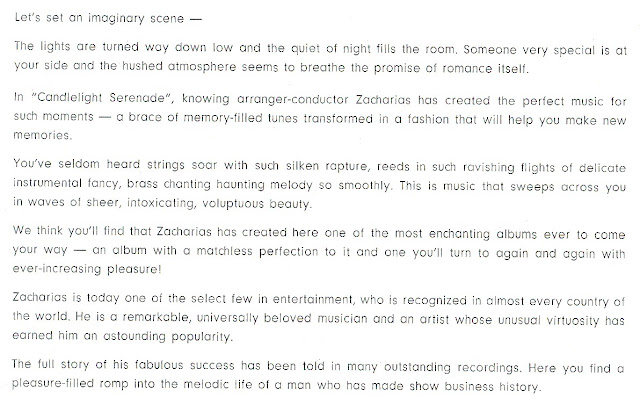 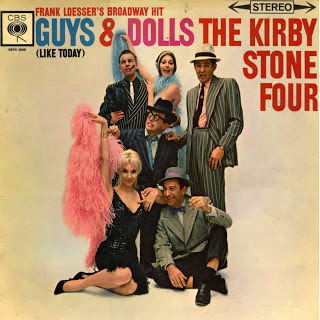 This was the first of a concept recording of "Broadway For Listening"...as far as I know they did another broadway show "My Fair Lady"..Its a good L/P pity they did not carry it on with other shows !

P.S. This is a fantastic L/P love it to bits !!....If anybody out there has a link to "My Fair Lady Swings" as mentioned above be grateful if you could put the link in the comments cheers !!

1. Libretto-ture
2. Fugue For Tinhorns
3. Adelaide's Lament
4. A Bushel And A Peck
5. Adelaide
6. Sit Down Your Rockin' The Boat 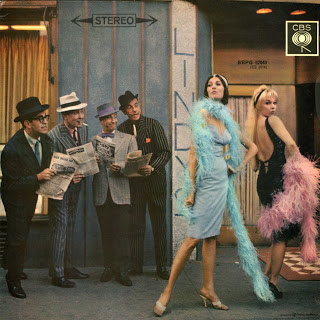 Email ThisBlogThis!Share to TwitterShare to FacebookShare to Pinterest
Labels: The Kirby Stone Four 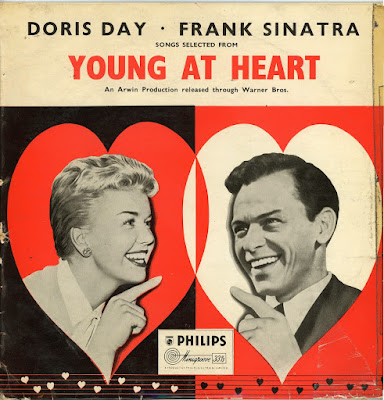 This is not from the soundtrack....In the distant 50's I think that they would go into the studio and record the songs...on this L/P there are two tracks that are not in the film and you don't get the title song either...I think it was because Sinatra recorded for "Capitol" records so I suppose it was something to do with "Contractual" things... The two songs that Frank sings are the ones not in the film.."One For The Road" was ok because he had recorded it before he moved to "Capitol"... before he joined the "Capitol" Label he was recorded by "Columbia" which was "Philips" in England...When I was in my teens Doris Day was my favourite singer... 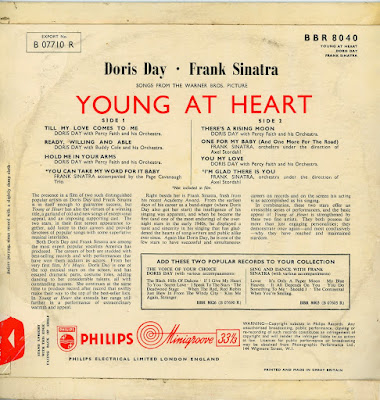 Email ThisBlogThis!Share to TwitterShare to FacebookShare to Pinterest
Labels: Young At Heart 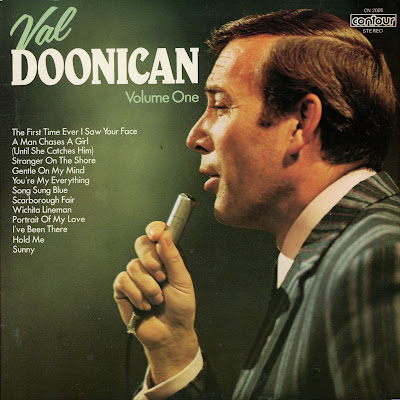 A nice laid back singer singing a selection of some very well known songs....no gimmicks just an orchestra a microphone and his voice....nothing exiting about the arrangements except that I believe "The Mike Sammes Singers" was walking through the "Fair" and also strolling along the "Shore"!!!...If you like your songs in a gentle mood then you will enjoy this one !! 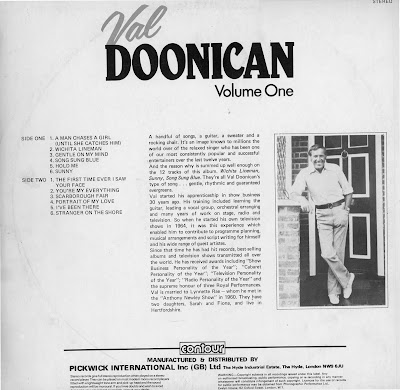 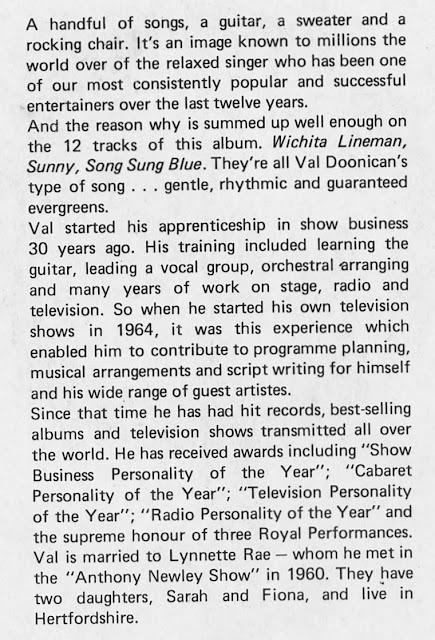 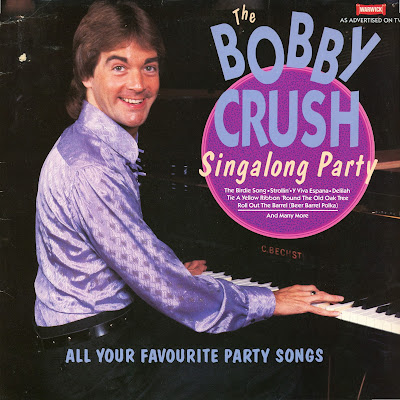 We now have another "Singalong"....Do people these days have "Singalong Parties" !!!...
Once again it is what it is !! a load of popular songs old and new played on a piano and sung by supposedly loads of people....I think the "little man" was at the control of the buttons and slides of the recording console !!!...the vocal sound does not sound right to me !!...and as for the piano playing its ok but very much in the background...it would have been better if the piano was featured first then the "Vocals"!!!!!....But I suppose it would then not be a "Singalong"!!
"Tanktop" hope your dad enjoys this "Singalong" as well !!! 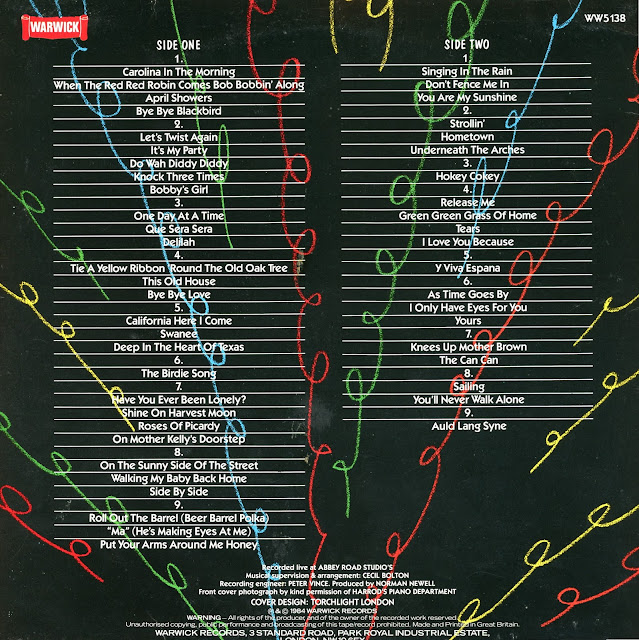 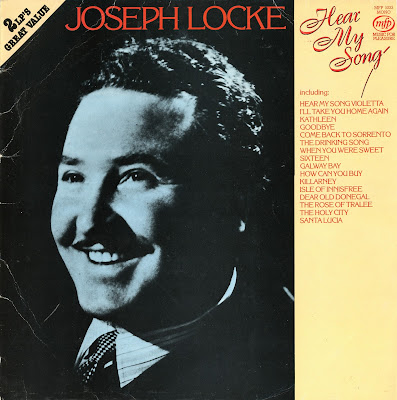 Known as The Singing Bobby, he became a local celebrity before starting to work the UK variety circuit, where he played 19 seasons in the northern English seaside resort of Blackpool. The renowned Irish tenor John McCormack (1884–1945) advised him that his voice was better suited to a lighter repertoire than the operatic one he had in mind, and urged him to find an agent—thus he found the noted impresario Jack Hylton (1892–1965) who booked him, but couldn't fit his full name on the bill, thus Joseph McLaughlin became Josef Locke.
He made his first radio broadcast in 1949, and subsequently appeared on TV programmes such as Rooftop Rendezvous, Top of the Town, All-star Bill and The Frankie Howerd Show. He was signed to the Columbia label in 1947, and his first releases were the two Italian songs "Santa Lucia" and "Come Back to Sorrento".

Now comes a strange and "Spooky" bit !!!
To my knowledge I have no recollection of buying or hearing his records when I was a teenager  I do recall knowing the name and are familiar with his recording of "Hear My Song"...and I doubt that I would have bought any of his records in the past...BUT !!..nearly all of the Irish tracks that is 13-24.... I knew all the words !!....Now that was a surprise to me and for the life of me I can't fathom out how I knew them !!!!.."Creepy Hey Wot" !!!
This is typical of the style of singers and music that was popular in the 40's early 50's I wonder how he would have been recieved today !!! (Vocal Wise) 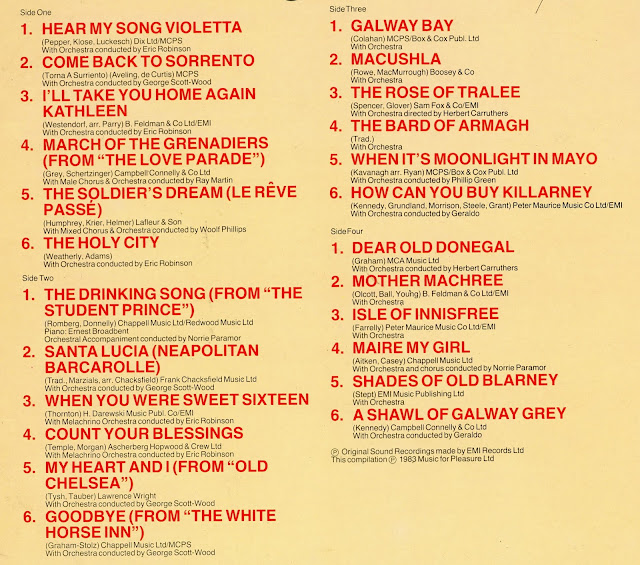 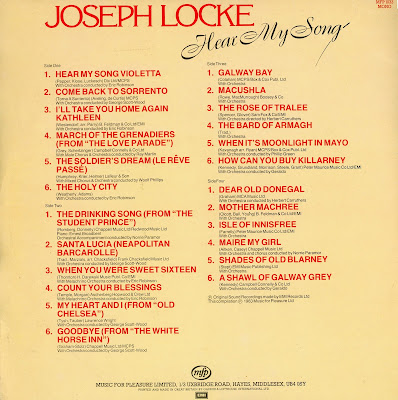 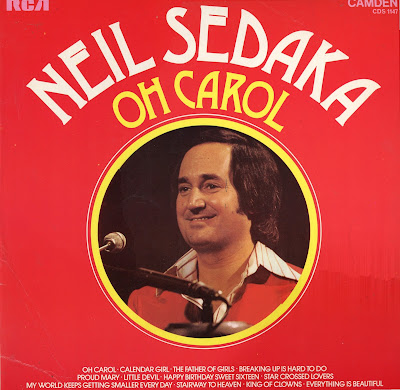 Every so often the Record Company's do the listening public a good turn and deliver a good compilation L/P that lives up to its potential and this one does !!...Not only it contains some of "Neil's classic hits but also some great "Live" recordings....Now whether or not the "Live" tracks come from previous released L/P's or they are tracks that have been gathering dust in the RCA Archive's that's exactly how a compilation should be !!!.....AND its seems to be on a "Budget" Label  !!! Good on Yer "CAMDEN" !!!!! 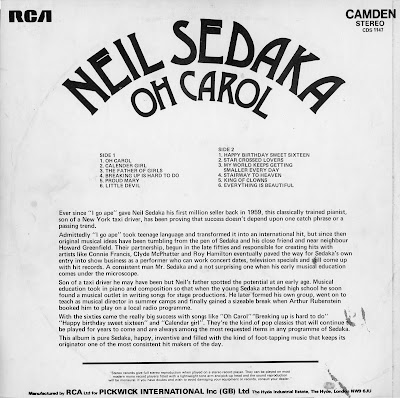