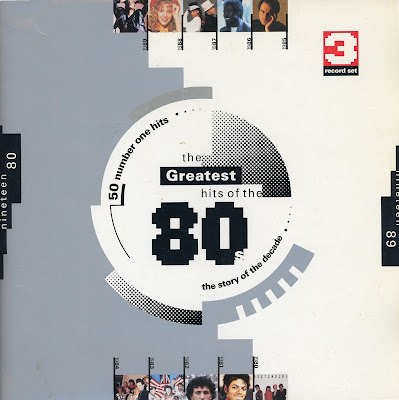 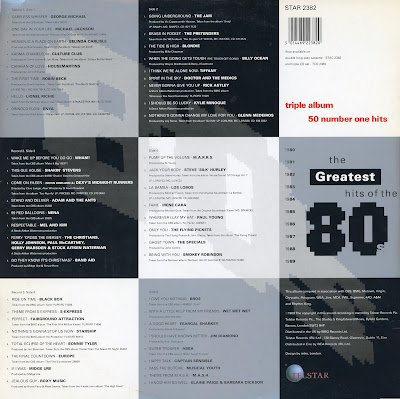 Email ThisBlogThis!Share to TwitterShare to FacebookShare to Pinterest
Labels: The Greatest Hits Of The 80's 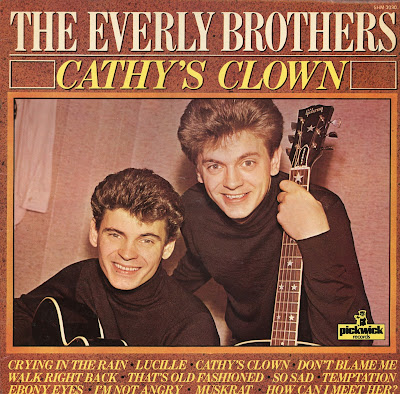 We now have some of the Everly Bros tracks including a couple of their Top Hits and a surprising and bizarre recording of "Temptation" way way way far out !! 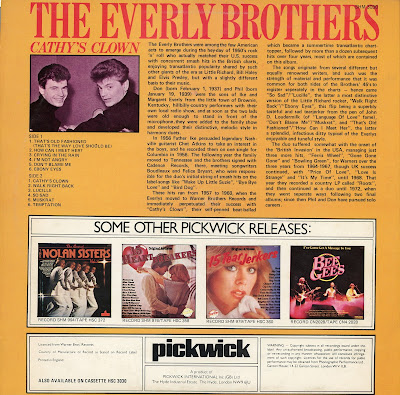 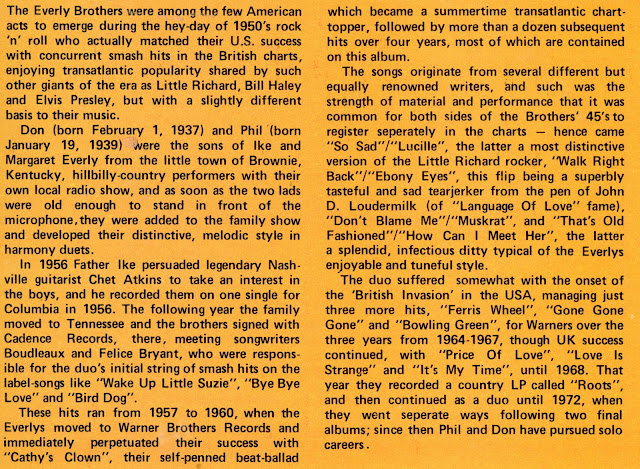 Email ThisBlogThis!Share to TwitterShare to FacebookShare to Pinterest
Labels: The Everly Brothers 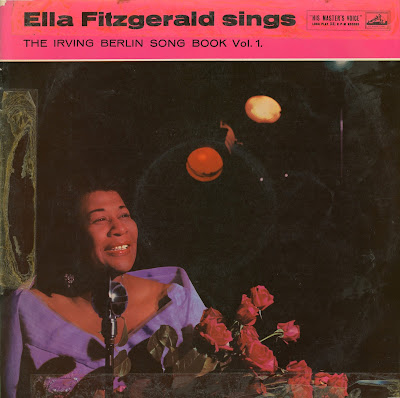 Another of Ella's Songbooks Vol 1....Vol 2 will arrive shortly !!.....This time the Orchestra is by "Paul Weston".....you do run out of things to say about Ella....even in the later years when her voice wasn't at it's best the "Magic" was still there....This Songbook is Ella definatly at her Peak !!

P.S. "It only seems  like yesterday" is a Quote that everybody at some point in their life has stated !! so here's me having a say !!...58 Years have shot by since "Ella" got behind the microphone in the recording studio and produced this "Gem".....sadly she is missed by the thousands of fans around the world !!!...RIP "Ella" !!!

1. Lets Face The Music And Dance
2. You're Laughing At Me
3. Let Yourself Go
4. You Can Have Him
5. Russian Lullaby
6. Puttin' On The Ritz
7. Get Thee Behind Me Satan
8. Alexander's Ragtime Band 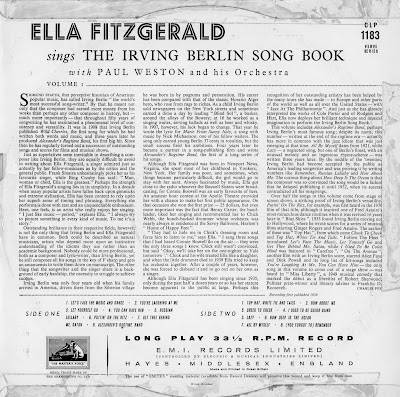 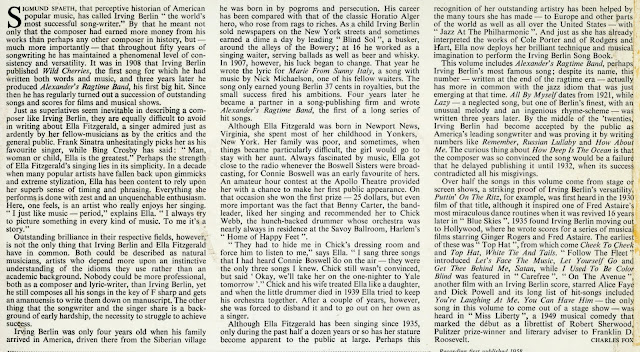 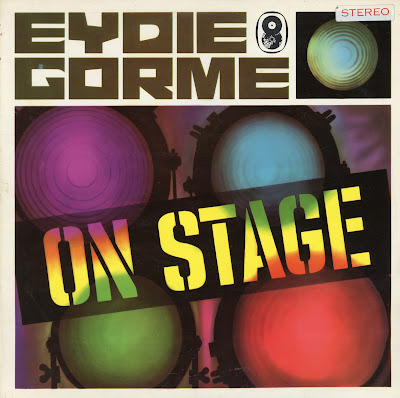 This is one of those L/P's that the record company fails on delivery !!...what I  mean is when I first saw and bought this L/P I was expecting some "live performances" of Eydie's.... instead on it is a selection of "Standards"....although I have said before that Eydie has never made a bad L/P this one is a mediocre one....NOW whether or not I have been initalialy disapointed by it and it has influenced my judgement I don't know....But there does seem to be something missing !!!.....Would be interested in other peoples opinon as I know there are quite a few "Eydie Gorme" fans out there !!!...so come on people let me know what you think !!

1. Taking A Chance On Love 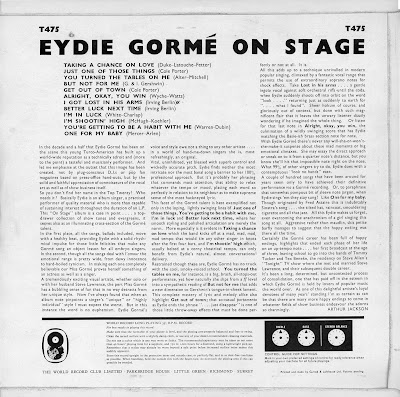 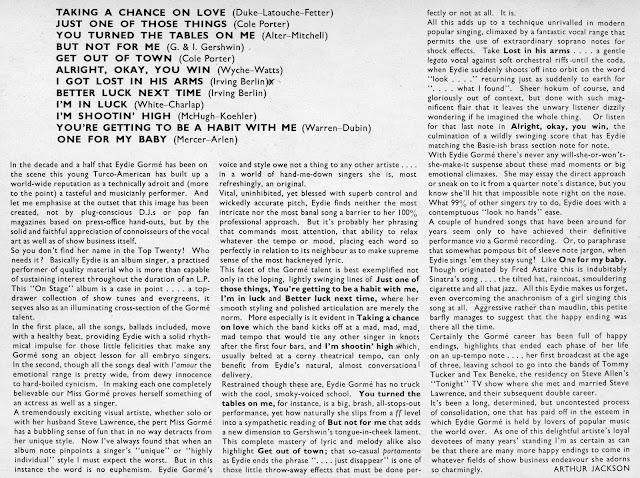 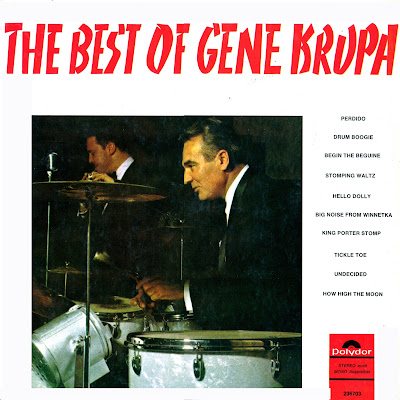 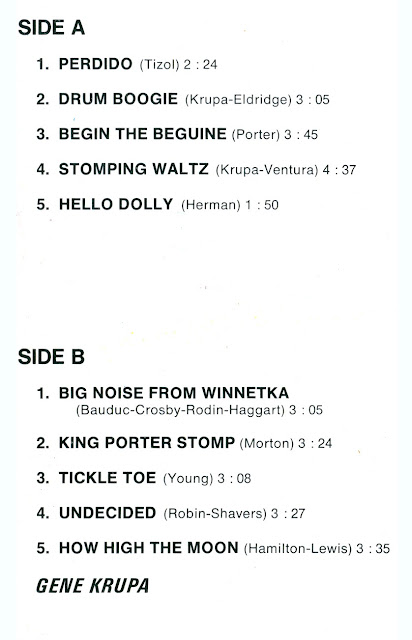 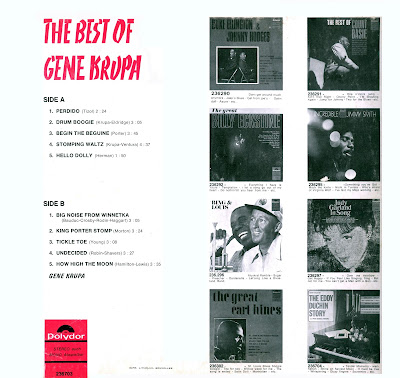 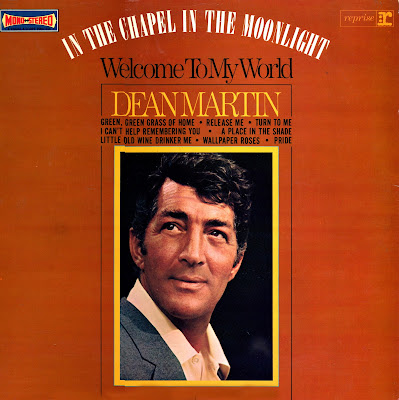 Still in Belguim !!...not had any Dean Martin for a while so here is he is on the "Reprise" label which no doubt everyone must know was Frank Sinatra's Label giving some "wellie" to some "Country & Western" type "Ditties"!!!! 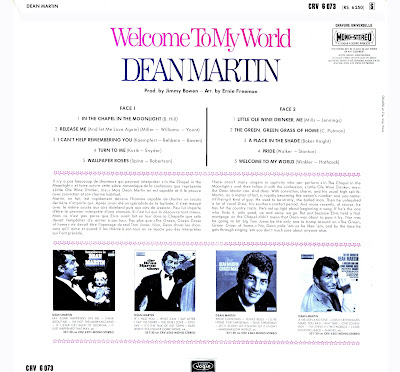 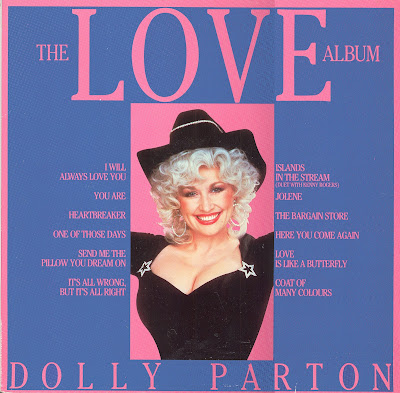 Lets take a wander over the Channel now not walking !! of course !!! and listen to the well up front lady !!...Most of the songs on this one she has written herself....so the "Dumb Blonde" tag does not definatly apply !!!...TA Bob !!! 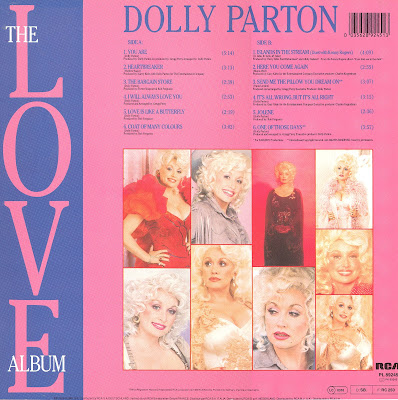 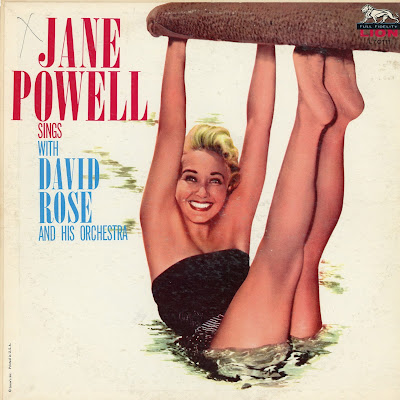 Songs From "The King And I" and from Janes Film "Rich Young And Pretty" plus a couple more tracks...just a pleasant set of songs with "Jane Powell" in her "Musical Film" Mode ! 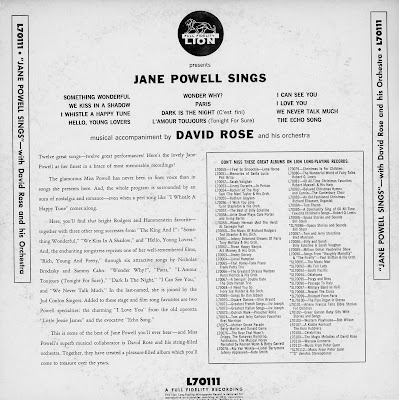 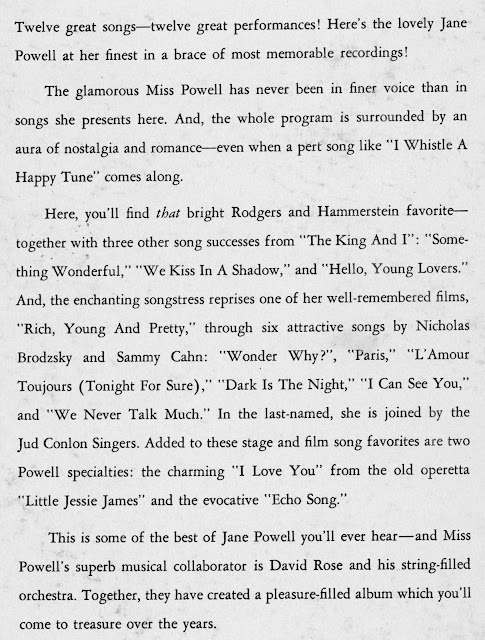 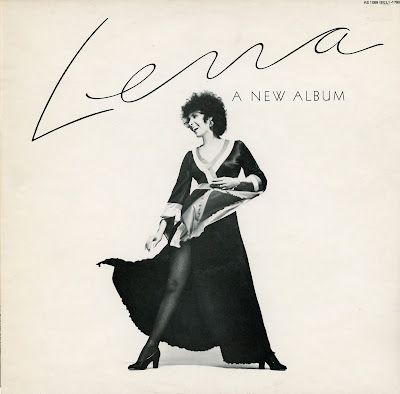 This is a beautiful set of standard songs by Lena recorded in 1976 in London..featuring "Phil Woods" on saxophone on most of the tracks...best track by far is "Someone To Watch Over Me" also featuring "David Snell" on Harp at the beginning and a  great solo sax by Phil...boy!! it does'nt get any better than that...and as I've said many times they don't make em' like that anymore !!

P.S. After listening to this again the track "I've Got The World On A String" is in my view the best version EVER even beating "Sinatra's and "Boy" that says it all !!!

1. I've Grown Accustomed To His Face
2. Someone To Watch Over Me
3. My Funny Valentine
4. Someday My Prince Will Come
5. I've Got The World On A String 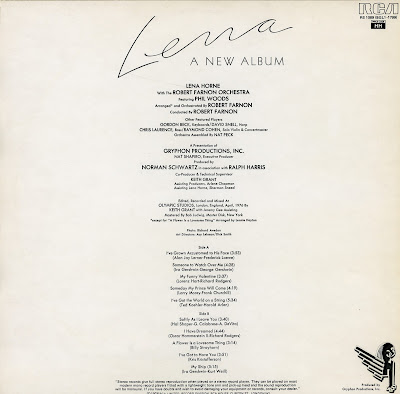 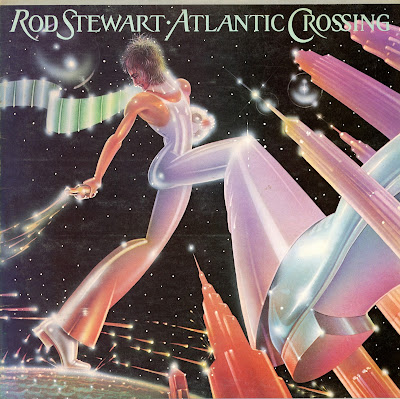 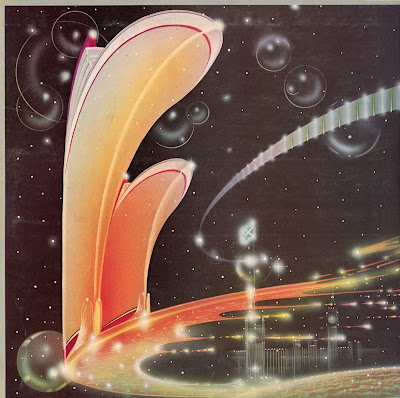 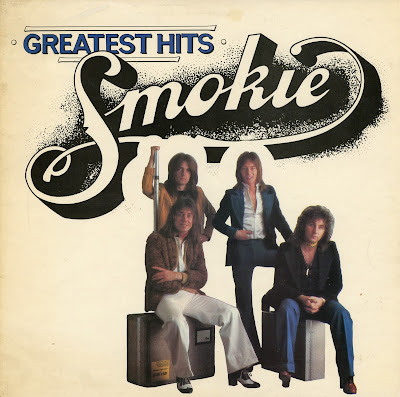 Here's one of the more melodic groups of the 70's singing some of their hits...BUT not the Swearing Version of "Living Next Door To Alice "!!!!

1. Lay Back In The Arms Of Someone
2. Something's Been Making Me Blue
3. If You Think You Know How To Love Me
4. Pass It Around
5. I'll Meet You At Midnight

1. Living Next Door To Alice
2. Changing All The Time
3. Don't Play Your Rock And Roll For Me
4. Back To Bradford
5. Wild Wild Angels 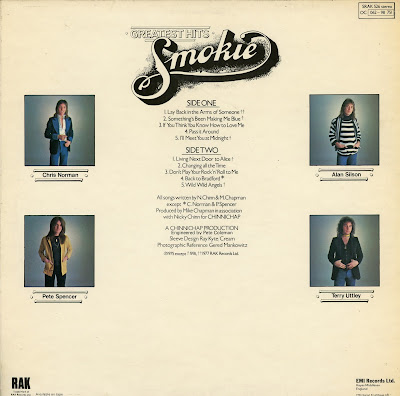